I know this old sewing machine doesn't look like much. It's old, greasy, the paint is worn off, and it's loud as heck. Even though this machine has been the cause of immense frustration and at times almost brought me to tears I am very thankful for it.

I found this machine on craigslist for a fraction of the cost it would have been if I bought a refurbished one online. I'm not even sure the guy who sold it to me knew what he was getting rid of, and to be honest I had no idea either. If I gave someone who wants to learn how to sew one piece of advice, I would tell them to never try and teach yourself how to sew by starting off with a commercial sewing machine. The learning curve is steep and a simple mistake can cause hundreds of dollars in damage or you could sew strait through your finger!

I have broke needles that have then flown out and hit my face, I've ran the walking foot over my fingers, I've tried to fix parts that I've broken only to cause more damage and then had to pay to have it professionally fixed. Shoot, I've even pulled a back muscle just moving this thing, it must weigh 150lbs.

Even though I have more scars now then before I started sewing I am proud to say I couldn't do what I do without this old beauty. This machine has enabled me to sew super thick materials like fire hose and bunker gear with ease. Without it I would not be able to create the duffle bags and toiletry bags and many other things I create. I know it is no longer thanksgiving, but I have so many things I am thankful for, family, health, a great job, and yes my old pfaff 545 industrial sewing machine. 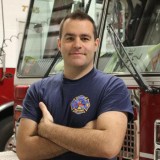